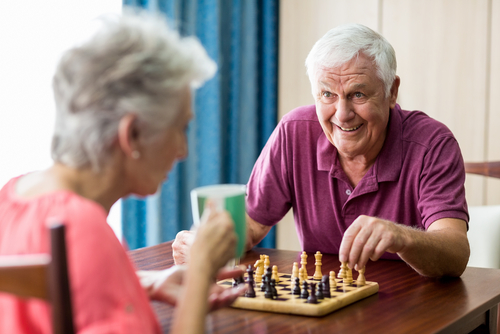 Whether you pick one of the better options of Long Beach assisted living for your loved one or find them one of the finer nursing homes in Long Beach, it bears making sure that the time they spend keeps them engaged and healthy for a good part of their remaining years. When you pick a senior living community, you need to make sure that this aspect of their living arrangement is kept above board.

The brain is often the part that needs the most stimulation the older you get, because this muscle mass decides how happy and content you can be. Mental stimulation also lets people stay sharp, well into their golden years. Lots of studies have shown that seniors who engaged themselves in leisure activities and games were less likely to fall prey to Alzheimer’s disease.

Puzzle and boards games can drive almost anyone to boredom pretty fast, which is why a selection of other exciting brain games is necessary to keeping seniors functioning well on the mental front.

There are many reasons why crossword puzzles are so good for ageing people. They engage more than one area of the brain, considering they require a lot of skills to win, including vocabulary and word skills, cognitive memory skills, and spatial and geometric reasoning. On top of that, they are also inexpensive, not to mention you can easily purchase enough to last you a year. Any one puzzle could take up an hour or more of the person involved in it, and after the puzzle has been filled out completely, it brings them a relatively rare sense of satisfaction.

Solving puzzles have been shown to slow down dementia and trigger the cognitive abilities of the brain. This makes it worthwhile offering Long Beach assisted living residents with word find puzzles that allow them to flex themselves mentally, and that too in a short amount of time. The spatial reasoning, spelling, and logic aspects can impart several benefits. One of the more interesting perks is that seniors can finish them without growing frustrated, because there is almost no instance where they would get bogged down.

Among board games played in a nursing home, scrabble ranks high for the reason that it has a major social aspect to it. This game also stretches the memory sectors of the mind than other games do, allowing seniors the chance to strategize and make use of mental calculation. Seniors who play scrabble regularly would look forward to weekly meets, and this can be good to their brains. There can also be a “scrabble” club, which is a great way to combat depression and loneliness, especially after a senior has just transitioned into their new living situation.